Plymouth High School encourages students, families, alumni and the community to enjoy its annual Homecoming activities. Everyone is especially invited to watch the parade and the football game!

The community is encouraged to enjoy Plymouth High School Homecoming Week from Sept. 22 to 28, especially the activities on Friday Sept. 27.

The annual PHS Homecoming Parade through downtown Plymouth will begin at 4:15 p.m. Friday Sept. 27. The route will begin near East Main and Caroline streets, head south to Mill Street, east on Mill to North Street, then north back to Main. 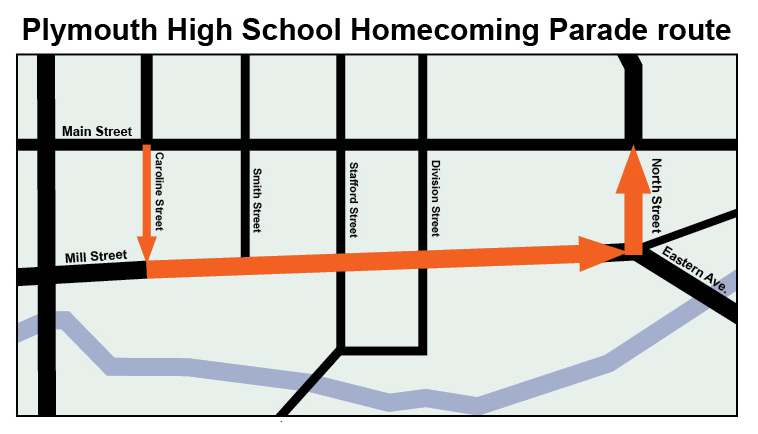 Attention parade participants: Cars, floats and walkers may participate. Vehicles must move at 5 mph. Candy, gum and other items cannot be thrown, but may be handed to children. Anyone throwing candy will be escorted off the parade route, and the City of Plymouth may issue citations to those in violation of this policy. Participants will line up beginning at 3:15 p.m. on a first-come, first-served basis. Homecoming committee members and Plymouth City Police will help direct participants.

To participate, return a completed Homecoming Parade Entry Form by 3 p.m. Monday Sept. 23 to the PHS office, 125 Highland Ave. There is no entry fee. Community Education & Recreation is offering a climb for ages 7 & up on the Adventure Ropes Course at Plymouth High School from 5 to 7 p.m. The climb is free, but participants (or the parent or guardian of minors) must sign a waiver.

A brat fry sponsored by the PHS Soccer Booster Club will be held at the PHS Finke Field concession stand. Brats, burgers and baked goods will be sold from 5:30 to 9 p.m.

The football game against Kewaskum will kick off at 7 p.m. PHS alumni are invited to sign in at the Plymouth Education Foundation welcome tent and receive a complimentary gift. Those who can’t make it to the game can follow the action live online at www.plymouthtv.org or at www.1420thebreeze.com.

A tug-of-war competition between the classes will be held throughout the week during the advisory period, with the finals Friday morning. Daily dress-up days also are planned for each day of the week.

The annual Homecoming Pep Rally/Coronation on Friday Sept. 27 will feature the Homecoming Court, chosen by the student body from representatives of each student activity or club.

The assembly also will include the induction of the newest members of the PHS Alumni Hall of Fame: the late Stan Struve of the Class of 1964 and April Doebert-Fischer of the Class of 2004.

The annual Homecoming Dance on Saturday Sept. 28 will conclude the week’s activities.

Homecoming is a great time for class reunions, which can include marching in the Homecoming Parade, recognition at the football game, and tours of Plymouth High School and Riverview Middle School (which served as the high school through 1965). Please let the Plymouth Education Foundation know if you're planning a class reunion at any time of the year.

Visit our Alumni Information page for more information about reunions scheduled during Homecoming.

Homecoming at a glance

• Dress Up: “Glow in the Dark Day” (neon apparel)
• Sophomore Tug of War - during Advisory in Gym