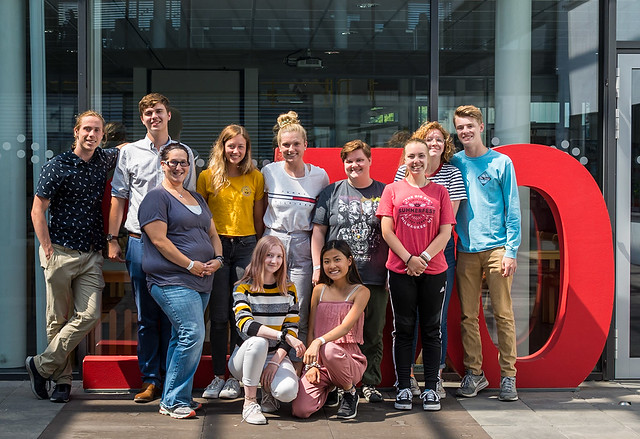 Many Plymouth High School students spent part of their summer in a foreign country, and encouraged others to apply now for similar experiences next summer.

Kernen spent three weeks in June learning about marine science and field work. On the water, she was able to swim, snorkel, paddle board, and surf. On land, she had the opportunity to play sports on the beach, visit unique architecture, and try Spanish cuisine.

Her group also traveled to nearby islands. “We spent two days on the island of Menorca cliff jumping, shopping, eating gelato, snorkeling, and going to the beach,” she said. “For one of our activities we were put into groups and we had to go through the sand and collect pieces of plastic that we would look under a microscope the following day. In those same groups, we did a yoga challenge where we had to take pictures of the poses. It was so much fun!”

“The highlight of my trip was getting to play with so many kids,” she said. “Having a language barrier didn't stop us from having fun. Another thing that was a highlight was meeting new people from all around the United States and making friends with them.”

The Dominican Republic is beautiful, but she admits to being challenged by temperatures of nearly 100 degrees each day and the absence of running water and electricity. “Something I took away is how lucky we have it here and how we take everything for granted,” she said. “Most to all of us always have food and clothes daily. Some of them haven't eaten in days or have been wearing the same clothes.”

Alex was part of a Global Entrepreneur program in July. “I look forward to meeting new people, and learning about how global business is conducted,” he said before the trip.

Claire was part of the Exploring Madrid Through the Arts program. “I wanted to learn more about the Spanish culture through the locals,” she said. “On my program I learned many skills that are necessary for most artisans in Spain. The culture was filled with beauty and the people were wonderful. I can’t wait to return!”

Lizzie spent three weeks in London in July, diving deeper into different types of theatre study. “I chose this program because I plan on pursuing theatre in the future,” she said. “I’m excited just to experience theatre from a different perspective.”

Only schools offering a Global Education Achievement Certificate can apply for the scholarships, which are given to schools demonstrating a commitment to developing global citizens and enthusiasm for world language instruction. Scholarship recipients are selected by CIEE from the school’s applicants based on both merit and financial need.

Applications for summer 2020 are due Dec. 6. This year’s participants encourage others to consider applying. “I made the most amazing friendships, and I learned so much about marine science and myself,” Kernan said. “I'm so grateful that I was able to get an opportunity like that, and I hope a lot of people can be able to do something like that because it is life changing!”

The group painted desks in bright colors for an elementary school as a community service activity. PHS students played soccer with the elementary students, and donated soccer jerseys and school supplies.

PHS students traveled to Karben, Germany, from June 10 to July 2 as part of an exchange program with the Kurt-Shumacher Schule there.

Students flew into Frankfurt and spent the first two weeks with a host family in Karben, attending school during the week and traveling with hosts on weekends. One student went to France, another to Amsterdam, another to an auto museum.

The group then spent the last few days in the Hamburg area, visiting the old medieval town of Rothenburg and also Lubeck to see the Sea Life Museum and the Baltic Sea. They also saw the Hercules Monument  fountain and castles and the Miniature Wonderland museum, took a bike tour, and visited the BW Papersystem factory (which has a sister factory in Sheboygan).

“One of the main highlights of the trip for me was simply living in a different country and experiencing a different culture firsthand,” said student Logan Manthey. “One of the favorite places for me to visit in Germany was the Auto & Technik Museum Sinsheim. Another interesting place in Germany that our group visited was the city of Hamburg, which had some very cool architecture, especially in the old port portion of the city.”

Connor Bruckner, who studied Russian in the Facilitated Language Studies class offered by Mrs. Koebel, received a scholarship from the U.S. Department of State to study in Daugavpils, Latvia, for six weeks.

While there, he studied Russian through a school called Learn Russian in the EU and stayed with a host family to be fully immersed in Russian language and culture.

“I want people to know this trip is extremely inexpensive, and you should take Facilitated World Language to be able to receive opportunities to travel the world,” he said.

PHS students aren’t the only ones having global experiences. PHS alumni Connor and Noah Joseph spent three weeks this summer backpacking throughout Europe.

They left June 24, planning to visit Lisbon, Portugal; Madrid, Spain; Barcelona, Spain; Rome, Italy; Assisi, Italy; Munich, Germany; and Paris, France. “However, due to late train reservations and ticket buying, we ended up taking multiple trains and making many switches in small cities along the way, even stopping a few times in Switzerland,” Connor said.

Along the way, they visited people who had come to Plymouth as AFS students, including Lucas Mancebo, Nuria Cervera, Blanca Cervera, Luis Jorquera, Leon Gehri, Matilde Passanha, and Maria do Carmo.

“We loved to experience the culture through our friends' daily lives, rather than only doing what most tourists do,” Connor said. “In Barcelona, we were able to go with Nuria Cervera to a full day of barbecue with her friends at their house. In Germany, Leon showed us what fraternities in Germany were like and how they differ from their American counterparts.”

• Visit the Innovative Opportunities section of our District Report Card to learn more about the unparalleled opportunities for international experiences available to our students.